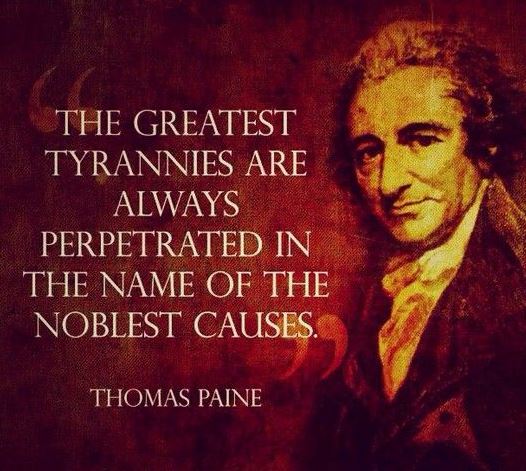 A Federal Mandate is not a LAW!!

-Please share this message throughout the Patriot, MAGA and Q community for me for maximum impact-

It is now long past the time that we take back control of the systems that we built and that are now being utilized to control us in America.

Look at Jan 6. We have a very big problem here America.

At this point it is time to stand up and call a spade a spade. I am damn well “sick and tired” of all of this BULLSHIT. Not to mention my Countryman walking around oblivious to these simple truths…
1. If a Law is enacted whether by Congress or a POTUS EO or anyone else that goes against the freedom afforded you in the Constitution and BILL OF RIGHTS, guess what!!! It is your Constitutional duty to ignore it and be FREE!
2. Federal “rules” are not LAW. FAA, FDA, AMA, USDA and all the rest DO NOT have authority over you. YOU HAVE AUTHORITY OVER THEM!! These are recommendations of conduct and procedure NOT LAW.
3. These events below led up to and were ALL engineered and carried out in the US by the “Intelligence agencies” FBI/CIA for a very specific agenda. To make you comply with Federal mandates.
-HIV/AIDS
-Waco, TX: David Koresh
-Ruby Ridge: Randy Weaver
-OKC: Timothy Mcveigh
-9/11

This was their plan. To subdue America into submission over the course of multiple decades and FFS it worked like a charm. Who the hell are we now? I walk around and I am everyday looking into the eyes of fear based, emotionally unaware, pharmaceutical hazed, fact starved human souls with no destination or purpose. That ain’t Americans. That is not who we are. It is who we were engineered to be, Intentionally by your “intelligence agency” overlords. Not your government!!

I RISE TO STAND FOR AMERICA!

This is the absolute unadulterated TRUTH!!

Now they have conspired and literally stolen the 2020 election of President DJT by We The People. That is and will be the “camel back straw” for each one them that participated. A bridge to far if you will. And I, along with millions of newly awakened Patriots are here to make sure of it. Justice will be served.
What is supposed to be the servant class has become your “officials”. Global Elite (Invisible Enemy). And then lied and cheated to maintain POWER.

Patriots are now here, informed, updated, educated and ready to take the control of America back from those who “serve” us. All institutions have been corrupted by the above mentioned conspirators. Its all just a conspiracy theory right? The Supreme Court, Congress, State Dept, State Houses, Governors, Mayors and every level of Government. All as a result of those mentioned events above.

Fear is your enemy. Fear is used to control you. Fear is what they bet on on Jan 6. And then they compared that day to Pearl Harbor and 9/11. So after a year of lockdowns, isolation, mask and vaccine mandates. Coupled with Country wide escalation of violence, reduction of police in key D controlled cities, looting, prosecutor dereliction of duty and mass releases of soldiers(prisoners) onto the streets along with a wide open border. They thought it would work perfectly the day before Jan 6. They then made their move against the Republic and that mistake woke up America.

Now as they have wanted since before WW1 and before all of the other events over a century, they grabbed the whole enchilada without a care in the world for what you thought. Now a Patriot is a domestic threat they say. Now someone who wants to see Justice is a violent extremest. Now a person who believes in the Truth is a “truther”. That was the plan for well over 100 years.

Question: Did it succeed?

Law and Order replaced the monarchy system upon the founding of America.

Can you now reconcile why that would be what is actually under attack, the Law? Do you see any clearer now? These organizations are corrupt to their core and we intend to use the public exposure and discussion among true Patriots of their crimes to bring them to Justice. Working together as an informed electorate to reclaim America from the ground up. Each politician, each system, each unlawful long arm of tyrants from coast to coast. We do not need any violence to get them. We simply replace them. Using the Constitution. This is why I say “the Constitution is your weapon”. It represents “Law Way”. Before the Constitution, LAW really didn’t exist. Equality didn’t exist, it was an I tell you and you do or else from the King type of law. The Kings law.

In America you are a King. Each of you. That was specifically the design. And the beauty for that matter. Sovereignty is not a myth. You just were never informed of it or were directly lied to as to how it applies you or just plain prevented from knowing it. Censorship is not modern and it certainly isn’t new.

I am tired of being told to wear a mask on an airplane, I am tired of being forced to comply as a criminal would to even fly on one. Hands up, shoes and belt off. None and I mean none of this prevents terrorist attacks or terrorism and you all know that. It is only to teach newer and younger generations to OBEY or else. And this was orchestrated by the highest levels for decades from a group of godless communist infiltrators at the most senior levels of every “intelligence agency”.  Working together tirelessly practically unimpeded to steal Americas ideals and principles back for the Tyrants that lost it 250 years ago.

I suggest we start using GETTR and any other social media that comes along to scream this message from the rooftops.

Freedom is earned not given, Tyranny is and will never, as long as it exists, leave the doorstep. It will never stop knocking. Your Founders knew this a long time ago. That is why you have a Constitution in the first place.

You need to learn it, read it, share it, spread it and focus on it because at the end of the day…It’s all you’ve got.
This is why the Fourth of July is celebrated.

Peace for the sake of Life

The Connection Between Communist China And Dr. Fauci

Martin Hyde, Standing up for our Children

BOOK US FOR AN EVENT